You may think that every wedding is the same, following the same guidelines, and as a photographer once you have shot one they are all the same. Well thankfully that’s extremely far from the truth, and what makes wedding so exciting.

We all know that emotions are on high alert, things run late now and again, but with careful planning we always find the time to have fun with the Bride and Groom as they get ready for their wedding.

From the photographer’s point of view it’s like being MacGyver, you have to pull your creative hat out of the bag along with your camera. you sometimes arrive at the grooms home or the parents’ home, and have to look for somewhere to create some amazing photos, sometimes you have to look for the picture in the most usual places, or start cleaning up after the boys all night footy or movie marathon, beer bottles and clothes lying around everywhere. (However this is not always the case, but hey who’s pointing fingers, we would probably be all the same.)

It’s those pre wedding set ups where we arrive at the Groom and Brides house, with their bridal party and start creating the story of the wedding day.

Simon’s was staying in his future brother in laws home, and had enjoyed a late night, the footy game was still on the big screen as we arrived, Simon and his two best men who had travelled from New Zealand to attend the wedding were all floating in the pool, enjoying a casual beer and relaxing while they could. 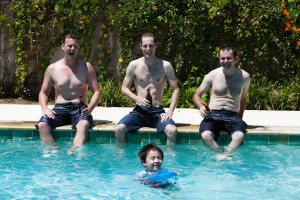 We got the boys starting to get ready, it’s all the small things that are important to tell the whole story, Also the fact that 60% of the guys can’t tie their own tie, never mind someone else’s. So yes we all have a lot of fun. We like to laugh and joke around, because normally blokey, blokes don’t dress each other, Especially New Zealanders…! So it’s good to see the interaction’s taking place. 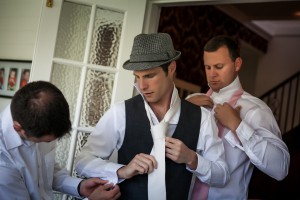 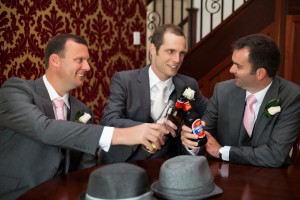 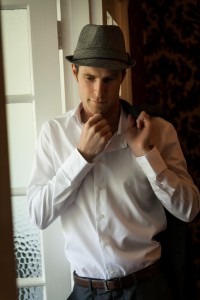 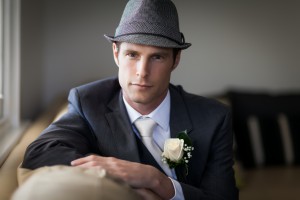 We then get some with all the boys dressed and in causal mode, before just spending a few minutes with the Groom. Using some carefully positioned window light we created some great portraits, as you can see Simon is quite photogenic, and you would battle to get a bad shot of him.

As we pack our gear and head out, we wish the beer swilling Groom and his merry men all the very best and that we will see them at the wedding Venue in an hour and half. Now the race to get to the Julies parents home, to see how she and her bridesmaids are getting on.

watch this space for the next episode with the Bride getting ready coming soon.

Before  start, I must warn you all, I’m so far behind with my Blogging, that I’m not sure where to begin, start with only a few couples or go through them all.

Well after some careful consideration I believe we should cover some of the special moments that we have had with some of our most memorable clients.

Simon and Julie certainly fit the bill, Both Simon and Julie were from Melbourne, and decided have their wedding in Perth, Western Australia where Julie grew up.  Simon originally hails from New Zealand so we were excited to see all his family and best friends arrive for their wedding day.

A few months before the wedding day we got together with Simon and Julie in Perth for their Engagement or Pre shoot, a some would like to call it, something we like to offer all our bridal couples, this gives us the opportunity to get to know our couple, and create some amazing images of jus the two of them, no stress and in a beautiful picturesque venue where we can feel free to create.    This also offers the couple the opportunity to get to know us as well. 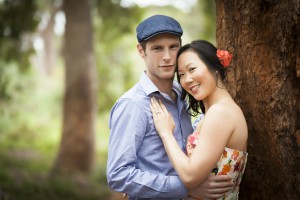 We also take his opportunity to help the couple to understand what we would be looking for on their wedding day as far as poses, and see how well they work together, lets face it we are not all perfect natural models, but still want to look amazing on our wedding day. so a slight amount of tweaking and we have the perfect image, but most of all we always like to make it a fun filled afternoon or morning.

Generally we like to shoot in a different location to where we would be planning to photography the wedding, just to make it different, but at the same time create something memorable.    Unfortunately It was an overcast day, and where we wanted open flowers, we had them all closed, but as you can see Simon and Julie were perfect and we created some amazing works of art that they have since had made into canvas’s and framed wall art for their home in Melbourne. 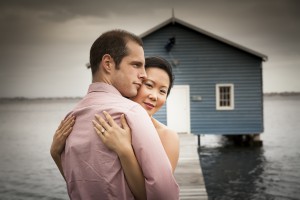 We also had a opportunity to catch up afterwards to confirm final details for the wedding day, and helped create a time line to try and follow. nothing ever runs perfectly we know, but its great to have a plan to start with. we also like to attend the wedding rehearsals as that also helps us prepare ourselves with condition at the venue and see the last minute changes that always happen.

The day before the wedding we were invited to Julies family home to witness and photography her family’s traditional Chinese tea ceremony, its always accompanied with amazing colourful traditional dress which I love.  Simon’s family are all from New Zealand, so it was an amazing mix of east and western cultures. and a great time was had by all. we also came away with stunning moments captured. 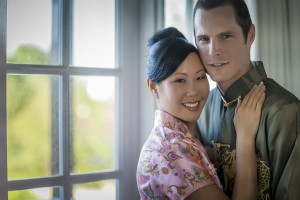 We will follow up with later post, showing a snippet of the wedding day, jamb packed with a mix of creative artwork and unbridled captured moments. we had fun time, thank you Simon and Julie for selecting us as your photographers for your special events.

Do you remember when you proposed?

As  wedding  photographers , we get to experience many exciting moments with our brides and grooms, each with their own wonderful stories of how they met, and the most amazing and romantic proposals that some have put to their respective partners.

I have heard of proposals in hot air balloons, on secluded beaches, and other amazingly romantic environments and venues. And all these amazing stories seem to happen to someone else…..!

But let’s face it! We males tend to not be the most romantic creatures out, and sometimes we do need to try and step up and out of the box in this area, taking some pre planning and careful fore thought.

Let’s face it! You want your wife in the future to think back on this momentous occasion with tears in her eye, and certainly not from laughter at the feeble and botched attempt.

I remember well the thought process I went through, which entailed quite a bit of pre planning on my side as well as a bit of effort on my future wife’s part.   I still stand by the belief that they need to work for it at the same time.

I was having a long distance relationship with my future wife, me living in Australia and my future wife in South Africa, and we planned to get together one December, with her visiting me in Perth.  So with a bit of thought!  I suggested that my future partner take up the same sport I love so much, and that is Scuba diving. Nothing worse than you and your future partner not having anything in common.

Well Nina agreed without hesitating, and so I set up her open water training with a local dive school I went too, everything was pre-arranged for when she arrived on holiday. When she arrived everything went well, and I accompanied Nina on her training dives and she had a great learning experience. Little did I know that she was in fact terrified of water, never mind that of the open ocean? So this was an opportunity to overcome her fear, which she did with flying colours.  She didn’t once blink an eyelid and enjoyed every dive we did together.

So after her training I suggested we go and do a dive from one of the secluded beaches I used to frequent, and it took a bit of persuading on my part to get her into the water, as the ocean that particular day was a little ruff.  So the water wasn’t as picturesque as I had imagined it would have been in my perfect proposal day dream.

I remember the swell on the sea bottom was a little ruff, making it difficult to just hover weightless as you would normally do. During our swim out I noticed a dark shadow dashing out from behind one of the rocks and into the distances, just out of visibility, and remember thinking, Oh hell that all we need is a shark or something else like this to ruin the day, but to my amazement and part horror it turned around and rushed towards us, only to realize that it was a huge seal. He/she came back to us just long enough to check us out, touching Nina’s mask and mine with its hairy nose, like a friendly hand shake.  After which turning around he/she swam away. You could hear my sigh of relief…!

Anyhow hand in hand we swam further out into deeper water where I turned to Nina and indicated to her to watch me, as we sunk to the bottom of the sea bed on our knees facing each other.

I could see her questioning concern look as to what was going on, so blundered on. I pulled out a few carefully prepared laminated cards out of one of my dive pockets and handed her one at a time.

As Nina read each card, you could see the expression on her face change, even with the dive mask squashed up against her cute face, it couldn’t hide the biggest smile you could have without safely losing your regulator.  Bubbles emitting from her mouth and mask as she laughed into it. It was an amazing sight, also her positive balance wasn’t as yet perfect so she sort of floated off the sea bottom like an inflated blow fish would in the rough water below.

Realizing that Nina wouldn’t be able to answer properly, so I gave her another card which was double sided, one side said YES! And the other Side NO!  It was that special moment when nodding her head and pointing to the card that read YES helped change my life.

Then taking out the small little box with her engagement ring in and slipping it on her little pale finger will always be imbedded in my mind for years to come.

As for the rest of the dive it was pretty short and uneventful, and with great joy and excitement we waddled out of the ocean, hand in hand like two drunk sailors on shore leave.

The notice in the Local newspaper read:

Anetta (Nina) and Nigel Sparg are delighted to announce their engagement, which took place on the 24th December 2007.

The proposition made and accepted under the ocean during a recreational and engaging scuba dive.

Well it’s been a few years now, and I know Nina still keeps those proposal  laminated cards in a safe place, and together we have had the opportunity and pleasure of scuba diving all around the world, in some of the most amazing waters with my life long dive buddy and partner..!

Oh Nina also love Photography and we make an amazing team, Who said you can’t have it all.  ;o)

P.S  So have you stepped up to the mark? tell us how it happened.